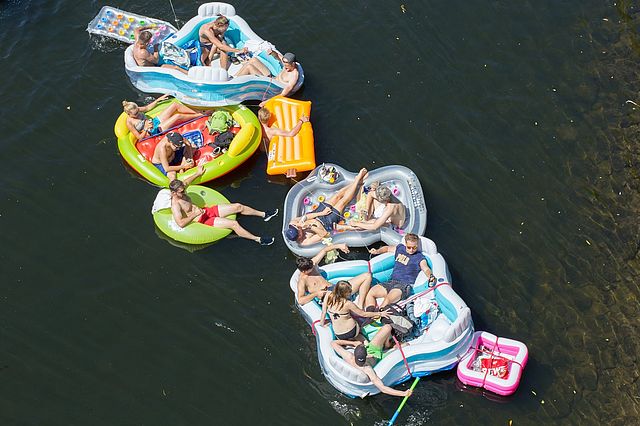 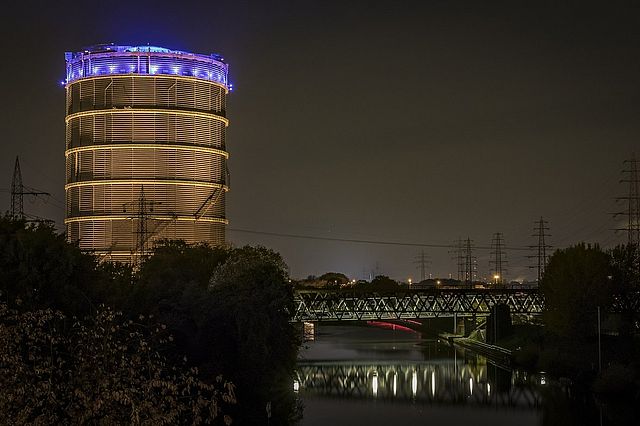 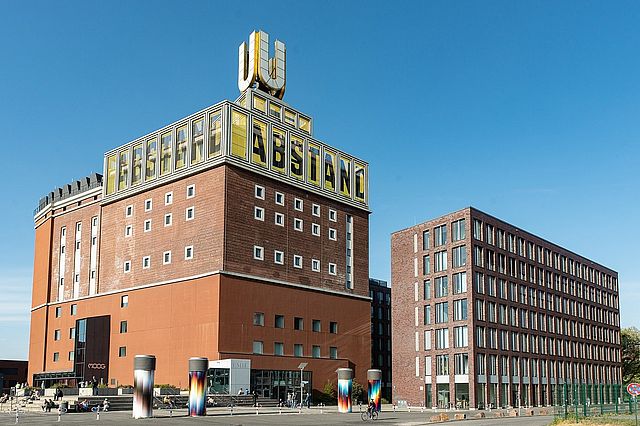 A journey through the Ruhr region

Everyone wants to go to Berlin? Not us! The Ruhr region - and Witten is right in the middle of it - is bigger and more varied than Berlin.

OK, these are facts and figures, but you still can't really "feel" what's really exciting about Witten or the Ruhr area? Then here are a few suggestions on how you can fill your time outside of the seminar and library.

Witten is - as I said - in the Ruhr area between Dortmund and Bochum and then south. The Ruhr is a collection of larger villages to form a metropolitan region that, with over 10 million inhabitants, is one of the 40 largest in the world! And Witten is virtually on the southern balcony with a view of the Bergische Land or Sauerland region.

If you want to get an overview of the diversity of the region between nature and culture, you can do this by bike, for example: The 240 km long Ruhrtalradweg leads from the source of the Ruhr in Winterberg to its mouth in Duisburg.

Dark spruce forests at the beginning give way to wide floodplains with small metal factories, and from Dortmund at the latest, you pass witnesses of industrial history: mines that have long since been closed down and lakes that were created to function as large sewage treatment basins for the mines' waste water. Today there is better water and also many more cycle paths in between on the old routes of the colliery railways - without hills, but with many sights.

Here you can plan your cycling tour

If that is too flat for you, you can also gain a few more metres in altitude and hike along the Ruhrhöhenweg: If you prefer something shorter and less of a hike than a walk, the Hohenstein or Steinhausen Castle are ideal. And right next door in Hattingen-Blankenstein is the Gethmannsche Garten.

The Ruhr region is famous and infamous for coal and steel in Germany, but also beyond: Even today, many people believe that the chimneys and blast furnaces smoke here day and night. Okay, there are still a few steelworks at the mouth of the Ruhr in Duisburg or a rolling mill in Bochum, but the last Prosper-Haniel coal mine in Bottrop brought the last piece of coal to the surface in 2018 and since then mining has been history, as this documentary shows, for example.

But mining can still be felt in many places. In the mining museum in Bochum, which gives a small impression of the feeling in the mining area. At Zeche Zollverein in Essen, once the largest colliery in Europe - today a Unesco World Heritage Site and an icon of industrial history - with an adjoining coking plant and Ruhr Museum, in Gelsenkirchen an entire park around the former Nordstern colliery, in Dortmund-Eving the Zollern colliery or the former Hansa coking plant.

Less is left of the steel: In Dortmund there is now the Phoenix Lake, where the Hoesch steelworks once smoked, and in Bochum there is the Westpark around the Jahrhunderthalle. In Duisburg, in the Nordpark, you can still climb up to a blast furnace almost 70 metres high, or in Oberhausen you can visit the Gasometer, which is the only remnant of the HOAG steelworks. The rest is now Centro-Oberhausen, the shopping mall.

In Witten you can also immerse yourself in the origins of Ruhr mining: Along the Ruhr, the coal strata often lie at the surface or just a few shovels deeper. The Nachtigall colliery in Witten is an interesting place to visit, and with just a few steps you can actually reach the coal seam. Or (in times of Corona, very practical) by video. All around there is a lot of forest with an 8-kilometre-long hiking trail on the history of mining.

However, there are also rumours that there are many single trails for mountain biking here. Mountain bikers are not always welcome where many people gather closely together, so a little consideration is recommended to avoid closing more trails. A little further north, other legacies of active mining offer themselves for conflict-free uphill and downhill riding: The Hoheward slagheap between Herten and Recklinghausen has been "optimised" for this purpose.

Speaking of outdoor sports: if you are looking for a tree top rope parks, you will find one in the neighbouring town of Wetter and in many other towns in the region (Velbert, Oberhausen, Dortmund, Recklinghausen). There are some rocks for bouldering and of course you can watch them on YouTube from about 4:13. And the Isenberg for people who can tie knots in ropes and for whom lounging around on a crash pad is not enough. Even if the weather isn't good enough for outdoors, there's plenty on offer for indoor climbing in the Ruhr region. And to round off the topic of "outdoor sports also possible indoors": skiing is possible here, skydiving here. Both in Bottrop.

Or into the water

But now more ideas for real fresh air. For example, you can paddle on the Ruhr by renting a boat with several other people or, if you already have one, by contacting a nearby club. If you want to get out on the water to take advantage of the wind, you'll be happy at Lake Kemnader, Lake Harkort or Lake Baldeney. Lake Kemnader, which is rather shallow, is not so suitable for underwater diving, but in Duisburg you can even go wreck diving in a gasometer, and there are more than enough other spots in the lakes of the Bergisches Land and the Sauerland. In Duisburg there is a lift facility for wakeboard and water-ski fans. Those who want to take it easy can go on a tour with the swallows or also let themselves be sailed on Lake Kemnader.

The dust must come down

Anyone who has ever breathed the dusty air underground will have an idea of how great the thirst was in the mining district when mining was still active: Dortmund was once Germany's most important "beer city". The Dortmunder U, the remnants of the Dortmund Union Brewery, still bears witness to this today. And if you want to take a more cultural approach, you can visit the brewery museum and many others. The Fiege  brewery is still important in Bochum and Stauder in Essen.

Now you can't get a “Pilsken” (Pils) down so dry, so you need a "Kurzen" (shot) to go with it. In Witten, the Sonnenschein distillery still produces it. Tours and tastings are possible at any time - if it weren't for Corona. By the way, the Sonnenschein distillery offers a very round grappa with the beautiful name "Wittner Geist" at the Hochschulwerk  of Witten/Herdecke University. So if anyone is wondering where to find it...

“Round thing that belongs in the square box”

Just like industrial history, football history is also part of the district. The "Classico" here is called the “Revierderby”, and if you still don't know who is playing against whom, you can skip this paragraph. Or fill in the gaps in your education in the football museum.

Everyone else can hope to get hold of a ticket at some point, until then there are only stadium tours (perhaps again after Corona) in the most beautiful stadium in the world. Or in the other city or even in the division below? (Note from the editors: The order could change soon).

At the beginning, we already mentioned that the Ruhr region consists of many cities that were initially far apart. With coal and steel they grew rapidly and today town signs stand at the edge of four-lane thoroughfares. This has consequences: For public transport, that there is no one to connect the region decently. In the individual cities, everything works to some extent, but little works across city boundaries. Trams have different gauges, some cities only have buses and no trams, and we are all still eagerly awaiting coordinated timetables in the Ruhr region. Other metropolises that have grown up around a single city have clear advantages over the Ruhr region, which is why the journey from A to B in the Ruhr region is often longer than you think. After a long wait, there is finally an app that manages to bundle all transport associations: mobil.nrw.
For Witten you can also use the VRR-App or the Deutsche Bahn (DB) App.

What is a minus for public transport is a plus for culture. Every city has its museums, theatres, swimming pools: the entire programme. This can be seen as a waste, but it can also be enjoyed.

Supra-regionally, Essen's Folkwang Museum with its classical modernism, photography and poster art is probably the best known. In Duisburg, the Küppersmühle Museum attracts visitors with its modern art, in Bottrop, the Quadrat with Josef Albers' paintings of the same format, and in Dortmund, the Museum am Ostwall, which, however, is no longer located on the street that gives it its name, but in the Dortmunder U (Dortmund U). Less well known is the museum in Gelsenkirchen, which shows a unique collection of kinetic art, and the museum in Bochum. In Bochum, too, the small underground museum "Situation Kunst" shows "Weltsichten", a permanent exhibition on the perception of the environment, and special exhibitions on modern art. The sculpture museum in Marl is probably unique in Germany, whereas the icon museum in Recklinghausen is more exotic.

Lights on, Curtains up

Under Klaus Peymann, the Schauspielhaus Bochum was the top address in the former West Germany; today, the theatre tends to see Essen and Oberhausen in front or Dortmund. That is changing but only Essen and Dortmund have full-range theatres with theatre, opera and dance. The “Theater an der Ruhr” in Mülheim often comes out on top in the ratings. In any case, it's not far to the next stage in the Ruhr region. Concerts in the philharmonic halls in Essen, Bochum  or Dortmund round up the programme. The “Musiktheater im Revier” in Gelsenkirchen and the Aalto-Theater in Essen are architecturally worth a visit.

The Werkstadt in Witten is the closest socio-cultural centre, but the Zeche in Bochum, the Bahnhof Langendreer, the Fletch Bizzel in Dortmund, the Mondpalast in Wanne-Eickel or the Stratmanns in Essen offer the counter-programme to the big stage and create space for cabaret and/or music. After the great death of the musical theatres, the ancestor of all these plays, the Starlight Express in Bochum, has been unwaveringly on the track since 1988 (!).

In addition to the cinema chains, almost every city still has local cinemas worth seeing. Essen offers the most pompous cinema with the Lichtburg. 1250 seats simply provide a fat scene for regular film premieres with actors, directors and red carpets. Not Cannes, Berlin or Venice, but simply worth seeing. If you want cinema with reclining seats, go to the planetarium in Bochum and have the starry sky explained to you.