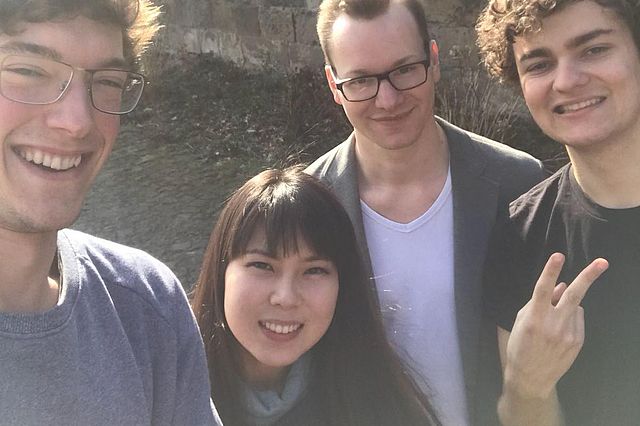 Picture of Yukari and Timo at the oikos Winter School at Uni Witten/Herdecke in 2018.

Two of our Japanese student guests reflect on their experience in Witten and the differences between the German and Japanese education and culture, for example: “The discussion was so heated that there was never a quiet moment, which was a contrast to usual discussions in Japan.” Written by Timo Niehoff, student assistant in the International Office, who became close friends with one of our Japanese visitors.

One of the main reasons for my interest in internationalisation is that I believe that gaining experience with other cultures and people from other countries is one of the best ways to prevent and counteract problems such as racism or stigmatisation. You are taken out of your comfort zone, get to know people who have a completely different value system than you do and realise that you can also live your life in a way that you never even would have considered yourself.

In this article, however, I would like to focus on how international experiences can help you grow personally and give you experiences that are unforgettable and may even have a significant impact on your life and future.

This was the case for Shuri Miyazaki from one of partner universities: Reitaku University in Japan. She studied at the University Witten/Herdecke for one semester and describes in an intimate, honest way how she how she overcame the various challenges that come with a stay abroad and grew from it.

For example, she writes the following about her experience of going to the bakery every day: „It was a challenge for me to live in a town where I didn't understand the language. When I tried to buy bread at a bakery, they spoke only German, and I couldn't understand even the names of bread. I couldn’t hear the price well, so I gave a large bill, and my wallet was full of coins. After going to the same bakery several times, I became familiar with the store clerk. I told him in half-English, half-German that I was coming from Japan and studying in Germany for half a year. He taught me the names of different types of bread and how many coins I needed to buy the bread. About two months later, when I could pay out with just the right amount of money, I was so happy that I almost shouted with joy, and the regular customer whom I was familiar with applauded me. It's […] a fun memory I have.“

Solving and overcoming challenges are experiences you can grow from and be proud of. But memories you never forget are the ones you share with other people. Shuri also talks about people who have helped her and friendships that have developed.

„It was my first experience to study abroad and to live alone for half a year without being able to speak German language at all. As an international student, I had to take German language classes, and prof. S. Disse who was in charge of them taught me very kindly. In addition, she also conducted the English language classes for me. It was very kind of her and thanks to her thoughtfulness, I could learn English language at UW/H. As a newcomer to Germany, I was relieved to be able to take classes at UW/H without going to Ruhr-Universität Bochum only to take English courses. After the first class, she took me to lunch and explained the menu written in German when I was choosing a dish. I was especially grateful to her for having accompanied me to the bank and helped me negotiate with them, which was critical for my life in Germany.

Making close friends was also an important part of staying in Germany. In a German language class, I made friends with an international student from Turkey. She has been studying German language for almost five years and helped me study. Once she wrote me a hint in the corner of her notebook when I was asked to answer a question during class. We still keep in touch. Also, when I participated in a gathering of a community for international students, I had various experiences that I had never had before in Japan, such as making cookies together and going out for a drink together. Through these events, I made friends with international students from different parts of the world, such as Italy and Spain, and students from different faculties such as the Faculty of Health. We went to the Christmas market in Witten together, which was the most enjoyable and precious memory of staying in Germany.“

Seia Shinchi, also from Reitaku University in Japan, visited us for a few days in Witten to participate in the oikos Winter School, an international conference on sustainability topics organised by students. She writes, much like Shuri, about the wonderful memories with the other participants of the Winter School in her report abroad. „[…] the other members of the conference helped me to feel involved. Even though I couldn't speak positively and couldn't share the information easily, all the members said to me, "Are you okay? Did you understand?" During breaks, some approached me and said, "if you have anything that you don't understand in discussions, please ask me, then I will explain anytime." They were always concerned about me and gave me advice. I might have been a nuisance to them. However, there was no doubt that I was able to survive the week thanks to the friendship of such wonderful members. Friendship with them is the best treasure I had gained from attending this conference.”

She writes about the cultural differences as well: “The other participants asked the speakers questions whenever they had some, so that the guest speakers couldn’t continue their lectures sometimes. The discussion was so heated that there was never a quiet moment, which was a contrast to usual discussions in Japan. I was so shocked by my lack of self-confidence that I couldn't say anything even if I had opinions or ideas. […] That is why I am now training myself to express my opinions clearly and logically in my daily life, so that I can change my passive attitude.”

I myself co-organised the oikos Winter School 2018 where a great friendship with Yukari, a Japanese student developed. I still have regular contact with her and it is interesting to see how we have developed after this shared experience. She has already planned a visit to Germany and is even considering doing the PPE Masters here in Witten.

Facing challenges and overcoming them, getting to know people from the other side of the world and making friendships that stay with you for a long time and having experiences that leave a lasting impression. All of this is enormously valuable and anything but a matter of course. But because of great, dedicated people, many students are able to take advantage of this opportunity.

I will end with a closing thought from Shuri: „Maybe, I grew a little bit. Studying abroad has broadened my perspectives. Even though I experienced a lot of problems there, it was a joy to get over them one by one. After I returned to Japan, my friends told me that I have changed and became more active and outgoing. Some professor also mentioned that I have become more independent and social than before. I'm really happy that I studied in Germany, which was a lifechanging experience.“

Are you also interested in getting to know another culture? Does Japan interest you? We have three partner universities in Japan: Reitaku University in Kashiwa, Sophia University in Tokyo and Kansai University in Osaka. All the places for the next two semesters are filled, but you can still apply for the Winter Semester 22/23 and Summer Semester 2023. Deadline for application in January 15th, 2022. More information available in the intranet.